A long time ago, the hawk and the hen were living near each other. One day the hen borrowed a knife from the hawk, so that she would cut a cray fish. Since they were friends, helping each other in times of need, the Hawk gave the Hen his knife. When the hen arrived at her home, she used the knife. Thereafter her child took the knife and started to play with it. Soon the child lost the knife. When the hen asked her child what had happen with the knife and it said:  “I have lost it.”

So the hen set out to bring the news about the lost knife to her friend hawk. When the hawk heard about it, he said: “Me, I need this very same knife and not any other thing!” The hen returned to her house and searched everywhere but it was not found. Later the hawk warned the hen: “If you don’t bring back my knife, I will eat all your offspring.” The hen proposed to give her friend anything else, but he did not agree. Since that day we see that hens scratch about the ground, as if it’s still searching diligently for that knife, while the hawk likes to catch young chickens and eat them as a revenge to the hen. 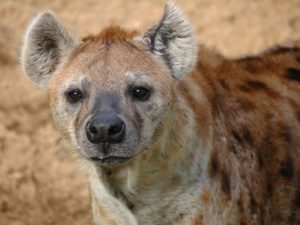 The unfaithiful Hyena: A story told by Jennifer Phiri_Zambia
There was the Hare and Tortoise, they were good friends.…